This is an exclusive Disney Showcase Key information brought to us by a Cast Member of Disneyland Paris. 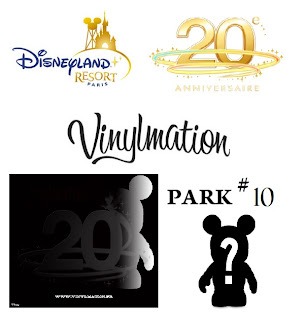 According to this source, and supported by the recent rumors about DLP's 20th anniversary Vinylmation serie, this serie is planed to be the next Park #10 serie !So, it would be available in WDW and DLR too, and not exclusive at DLP.

There aren't any official release date to this day, but the themes of this serie composed by 12 figures will be DLP's attractions. By the way, in our latest article  (french language), we also revealled the project of a 20th special 9" (with the 3" Good Fairies) and a small serie of 4 or 5 Disney Characters in DLP's 20th anniversary costumes.

There aren't new information about the 9" but  according to another source, this small serie would be for its part exclusive to France and it will go out between March and June.


Finally, the text under the image of the website http://www.vinylmation.fr/  has been update:

17 Février 2012 / J-55 #Vinylmation ™ - Park 8 (P10-2)
@Harrington's Fine China and Porcelains, Stars traders, The Disney Animation Gallery, Legends of Hollywood,
The Disney Store, The Disney Gallery, Art Gallery à Disneyland Hotel (D@TF) et Pueblo Trading Post (selon ouverture).
The most interesting is the 17 Février 2012 / J-55 which refer to Thursday the 12 of April, and that is the date of Disneyland Paris grand opening back in 1992 !!!
Is it too the official release date of the Vinylmation serie ?

These informations are subject to change and there hasn't been any official communication yet.